My sister invited us to swim with her and some friends that evening.  We had spent most of the day out, and although we had plans to be at my mom’s house in her absence, we had to abruptly leave after eating dinner. The poor kids were not doing well, so I took them home.  Not sure if it was the sickness or just whining.

More plans with friends at the pool. Mom had been kind to get the girls new Puddle Jumpers after trying them in the pool before, and seeing how they really liberated the girls and gave them confidence in the pool!  Thankful for those!  It was a blast, and it was a pleasure to share my friend’s birthday with her.  She is a rock solid friend who has stuck around for a long, long time. She is doing such a wonderful work raising her children, and is always up for challenging thought and really working through issues in a very dedicated, considerate and wise manner.  What a treasure!

The kids konked out hard after this, and really made the drive back to Mom’s house easier.  I took off with J to the doctor’s office since it was his scheduled one-year visit, and would certain include shots.  The visit went fine, and he did get three shots.  What a brave boy, and I felt bad for not having Tylenol on hand for him.  Naturally, he was tired after this ordeal, but he soldiered on through mommy picking out new swimsuits for everybody but him at Freedom House Thrift (if I’m out somewhere, I’m probably here.  What a Godsend, this store) and running some errands.  I am so bad to my kids sometimes.  He got shots? I’ve gotta shop. I’ve really gotta take them into consideration more.  The girls were still doing just fine at mom’s.

Two days after J’s shots, and the day after we had a sweet time with our friends, we felt like we could go and do something even though J had felt a little bit warm.  My mom joined us for Watermelon day.

A trip to the farmers market changed things a little, perspective wise.

Free samples of watermelon. Meeting the watermelon princess (an ambassador for watermelon awareness that the girls admired.  Mainly just about the tiara, haha!).  Wandering around the booths, and walking to the seed store.  We are bound every time we wander around there to go to the fountains, check on the fish, and see what new lawn ornaments have come in.

The girls were enjoying themselves, and Mom was enjoying them acting like they were scared of the half-submerged alligators in the fountains like they were real.  J was riding in the back carry in our Tula carrier.  He is a sweaty little guy to begin with and it was hot.  He seemed a little wimpy throughout the venture, but then once we had gotten to the seed store, he seemed a little more fussy.  He was quiet for a little while, and then out of nowhere, I heard him starting to wretch.  Before I knew it, he had vomited everything in his stomach onto my back.  Feeling helpless about the whole circumstance, we tried to just rescue him from sitting in his own vomit, when an employee of the seed store noticed our plight. She brought us to the place they keep their hoses, got us paper towels, helped wipe him down, and didn’t stop there.  She saw how much had been deposited on my shirt, and thought ahead about me having to get into the car.  “Come on in here and get yourself cleaned off.  I’ll get you a shirt.”  I tried to insist that it wasn’t necessary, and she was kind enough to prod me to take her up on it.  She gave me one of the work shirts that they wear (which I’ve admired for their unique design ever since I saw them!).

After we got relatively cleaned up, and another employee helped us rinse J’s and my clothes off.  Felt like we made friends with them, and I’m sure they won’t forget the people that got barf all over the place. 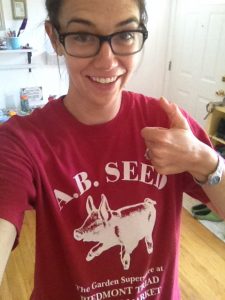 Every time I wear this shirt, I think of that employee, her kindness and compassion, and how it was pitiful that my son had to throw up and I’m the one that got a new t-shirt.

So at this point, I’m thinking, “Well, surely it’s complications from the shots.  Can’t be anything else.”

We were gearing up for an exciting weekend spent with our friends, Cody and Melody Curtis from Psallos.  They had planned to come to our church and perform their Romans album, and having been blessed by this immensely, Micah and I were very excited to have them back.  (My friend Lisa conducted an interview with them here if you’d like to know more about their Romans project) Having established such a sweet relationship with the two of them, we were delighted also to host some of the musicians they were bringing with them.  What a joy it was!  Those four guys were a blessing and blast.

There was one point on that Saturday that J randomly threw up.  He had been fussy, but never seemed to show anything else.  Plus, it was small amounts.

After Sunday, we were pretty pooped but thankful for such an exciting weekend.  Our hearts were pointed toward the next week, which would include many celebrations.  We thought.

Stay up to date!